More than 8m people in England – around 1 in 7 – are living in an unaffordable, insecure or unsuitable home, according to the first ever ‘state of the nation’ report on the housing crisis, released today by the National Housing Federation.(i)

The research shows that 8.4m people are hit by the broken housing market, capturing the true breadth, scale and impact of the housing crisis for the first time. It also shows that the crisis affects people of all generations and in all parts of the country. They face a wide range of issues, from homelessness and serious debt to overcrowding and ill health, and many children are missing out on a fair start in life.

For the first time, the research captures exactly how many people are hit by different aspects of the housing crisis, including high house prices and rents, unsuitable or poor quality homes, and the overall shortage of new homes. It reveals that more than 3.6m people are living in overcrowded homes, while 2.5m people can’t afford their rent or mortgage. Another 2.5m adults are stuck living with parents, with an ex-partner, or with friends because they can’t afford to move out.

The research also shows how the housing crisis is spread across the country. More people in the North of England struggle to afford their rent, while people in the South are more likely to face overcrowding or living with their parents because they can’t afford to move out.

The research also looks at what it would take to properly house these 8.4m people. Because of this, we now know the true extent of the ‘social housing waiting list’ for the first time. Almost half (43%) can only afford to live decently if they are in social housing – 3.6m people. Social housing rents are on average 50% cheaper than from private landlords, contracts are more secure and many properties are designed specifically for older people with mobility issues.

To meet the housing demand revealed today, the country needs 340,000 new homes every year, including 145,000 social homes. Now, the National Housing Federation, along with Shelter, Crisis, the Campaign to Protect Rural England and the Chartered Institute of Housing, is calling on the Government to build these social homes by investing £12.8bn every year for the next decade.

“Today’s research reveals the full enormity of the housing crisis – clearly, it is the single biggest domestic issue we face. The Government risks losing votes if it doesn’t take action to tackle the consequences it has for the lives of young and old alike, all across the country.

“From Cornwall to Cumbria, millions of people are being pushed into debt and poverty because rent is too expensive, children can’t study because they have no space in their overcrowded homes, and many older or disabled people are struggling to move around their own home because it’s unsuitable.

“This crisis cannot be solved by tweaks around the edges of the housing market. What we need is a return to proper funding for social housing, to the levels last seen under Churchill. Investing in housing is a win-win for the Government - it would bring down the housing benefit bill, provide everyone with a secure and stable start in life, and kick start an economic boom creating thousands of jobs.” 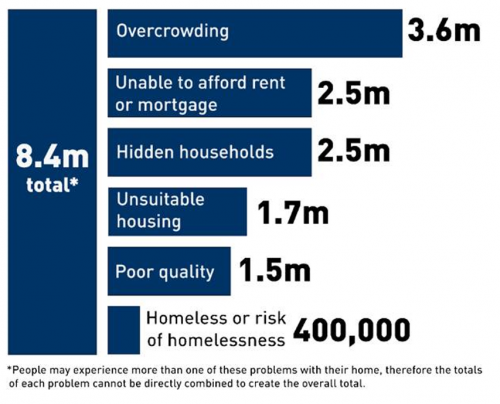 The research was carried out by Heriot-Watt University for the National Housing Federation, based on earlier work commissioned by the Federation in partnership with Crisis. Figures from the Understanding Society survey were analysed to look at the scale of different types of housing need. A briefing on the research is available on request.

The homelessness figures are based on research Crisis commissioned from Heriot-Watt University. This estimates on any given night the number of households experiencing the worst forms of homelessness and those considered to be statutorily homeless or at risk of homelessness. See Chapter 5 of Crisis’s plan to end homelessness.

(ii) Local housing registers – often referred to as ‘waiting lists’ – are recorded at household level rather than individual. The latest national register total is 1.1m households, whereas our analysis shows a total of 2.1m households (around 3.6m people) in need of a social rented home.

(iii) People may experience more than one of these problems with their home, therefore the totals of each problem cannot be directly combined to create the overall total.